As mentioned in McKinsey & Company’s ‘Diversity Matters’ report, gender, ethnic and racial diversity are key “competitive differentiators” between companies in the same industry. Organisations which place in the top quartile for racial and ethnic diversity are 35 percent more likely to have financial returns above their respective national industry averages. The same trend is found in gender diverse companies, with 15 percent higher financial returns for top-quartile organisations.

According to The Scottish Government, in 2014 the employment rate of black minority ethnic (BME) workers in Scotland was on average “13 percentage points lower than those of the white population” and this difference is mainly driven by the much lower employment rates of ethnic minority females, which are typically below 50 percent. Considering the plentiful benefits that come with a diverse workforce – higher profitability, increased innovation and creativity, and a better talent pool (to name a few) – Scotland’s homogenous workforce is particularly worrying for both the BME community and for the country’s prosperity as a whole. 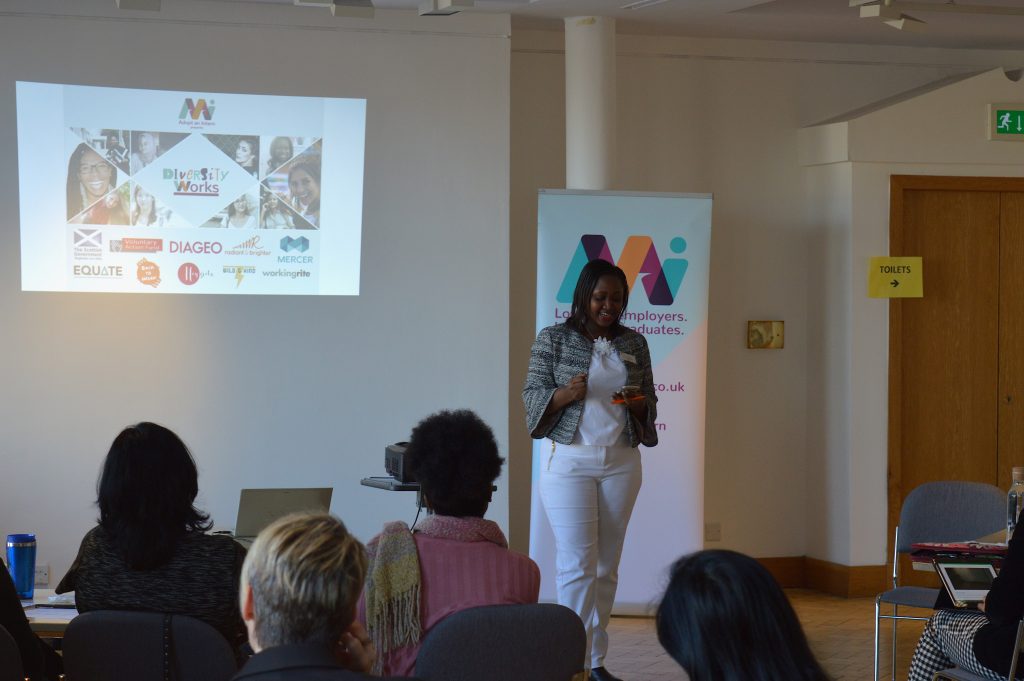 What Is Being Done

Adopt and Intern (AAI) are hosting a series of #DiversityWorks Seminars with support from Radiant and Brighter – a community interest company promoting diversity through education, inspiration and changing perceptions.

Focusing on the employment status of BME women in particular, the seminars are ground-breaking in that they create a safe-space for employers, prospective female BME employees, and business owners to discuss, in-depth, the lack of diversity of the Scottish workforce. Is the limited amount of diversity due to a lack of job applications from the BME community or is it a result of unconscious – or conscious – biases? Is the workplace culture in some businesses exclusive and are the cultures of non-Scottish employees given due consideration? These are just some of the questions that are discussed at the workshops.

This was a key message that was echoed at the Edinburgh seminar last month. While race, ethnicity and gender are often difficult topics to talk about openly, there is an urgent need to break the taboo on racial conversations and to tackle the sticky questions of race, bias and employment. At the end of each seminar, employers and employees leave not only better informed on what the barriers to employment are for BME women and how to start mitigating them, but employers in particular leave with an action-plan of how they will change their company’s culture of employment.

What You Can Do

If you would like to take the first step towards understanding workplace diversity, attend AAI’s FINAL Seminar in Aberdeen on January 10th.

You can also benchmark and improve the inclusivity of your workplace today by taking our 30-minute Quick Impact Assessment (QIA). As well as capturing how inclusive your business is, the assessment also gives you a snapshot of its social and environmental impact as a whole.