Viana took part in a 12-week Returnship with Drink Baotic as part of our Scottish Government-sponsored Back to Work project for minority ethnic women returners.

As you’ll see, Viana’s career break came after quite an adventure that took her, and her growing family, all over the UK before settling in Edinburgh.

My academic breakdown is like a great adventurous story; however here is the shorter version.

I started my education in Business Studies and Management at college before going to university to continue with the same subject. During this time I was going to through some challenging times at home which lead to me leaving home at 19, and dropping out of university to focus on sorting my life out and trying to decide what I really wanted to do.

With no parental or family support I moved to Edinburgh in 2005 with my partner (who had lived and studied in Edinburgh previously, and he sold me the magic of the city). On arrival I went to the job centre and was offered the option to work in McDonalds or a nursing home. I choose to work in a nursing home, because I thought maybe I could start a career in the care industry as I loved people and I really wanted to work with the elderly.

At the same time, I also took up the opportunity to study acting and performance at Edinburgh Telford college. I have always been creative and showed an interest in film and theatre, but I’d been encouraged to follow a blue-collar career path.

I graduated with an A grade in performance. This led to an opportunity to work with Edinburgh International Science Festival, touring primary schools throughout Scotland, performing an educational show about the human body. In 2010, I was offered an opportunity to study intensive postgraduate acting in London to learn a new acting practice, popular in LA, called Spolin, with extras such as stage combat and classical theatre.

The next two years of acting in London lead to amazing opportunities to work in Abu Dhabi Science festival, Wapping sights specific community show, I played old men in Chekov’s plays, was a vixen and soldier in Agamemnon and presented and educated people during the London 2012 Olympics and Paralympic Games.

I’ve probably missed some awesome moments but all of this shaped my work ethic and drive to keep enhancing my work, education and life experiences.

In 2012, I also found I out was pregnant with our daughter. This special surprise put a huge break in my amazing acting and performance run as we had the unfortunate luck of living in London during the crazy post-Olympics high renting cost.

Suddenly we found ourselves homeless, moving to Cornwall, back to London, to Exeter and then back to Edinburgh. The three of us were living in bedsits and I co-founded Snoovies, a digital magazine startup to learn a new skill in the digital industry to get ready for life after acting.

The last four years have been a mixture of hardships, awesome learning experiences, funny moments and finding out what we were made of. I personally feel that I can face anything life will throw at me now.

My job hunting experience in Edinburgh has been much better than the dry experience I had in Exeter. While I have been unemployed, I have been keeping busy and skilled up by taking free and or affordable online courses such as a diploma with CIM to develop a digital marketing skill as this was the career path I was planning for while I was homeless and working with Snoovies.

When we returned to Edinburgh I was at the end of my course, I jumped back into the job hunt to see if my skills and experience were enough to land a job.

The barriers I encountered was the lack of a ‘clear ask’ from employers. Although my course was accredited for digital marketing, I found most employers also wanted other software skills such as CMS, CRM, graphics skills, website skills and so on. I also did not have a degree (postgraduate in acting did not count) and in Edinburgh, I found I was competing with a lot of graduates.

Out of 30 applications, I got only one response which was from a Startup recruitment website. The interview was great, and I was last of two in the final selection, However, I was not offered the job because I was too creative for the role and the employer felt my skills would be better-suited a different role, that they did not have yet.

This experience led me to decide that I needed to go back to university and gain web design and development skills while also gaining a degree to better compete in the Edinburgh job market.

How did you hear about Adopt an Intern and the Back To Work project to support women returners?

Part of the Napier university scheme is for students to take the third year out and work in a relevant placement. While searching daily for placement opportunities I came across an Eventbrite event about supporting BAME women in Edinburgh and Glasgow to get back into work. I booked my place and carried on with other activities.

How did Adopt an Intern and Radiant & Brighter support you?

The Adopt an Intern CV workshop was valuable as I was able to see that my past experiences and current skills gained from recent digital marketing and web tech course, had put me in a great advantage for most of the jobs advertised on the scheme.

Meeting Radiant & Brighter allowed me the opportunity to connect with other BAME women in the city and meant I was able to build a supportive network with others who were in the same frustrating situation.

Your Returnship with Drink Baotic:

My responsibilities included creating an educational pack that would be accessible for download via the company website as well as new social media marketing content and prints. 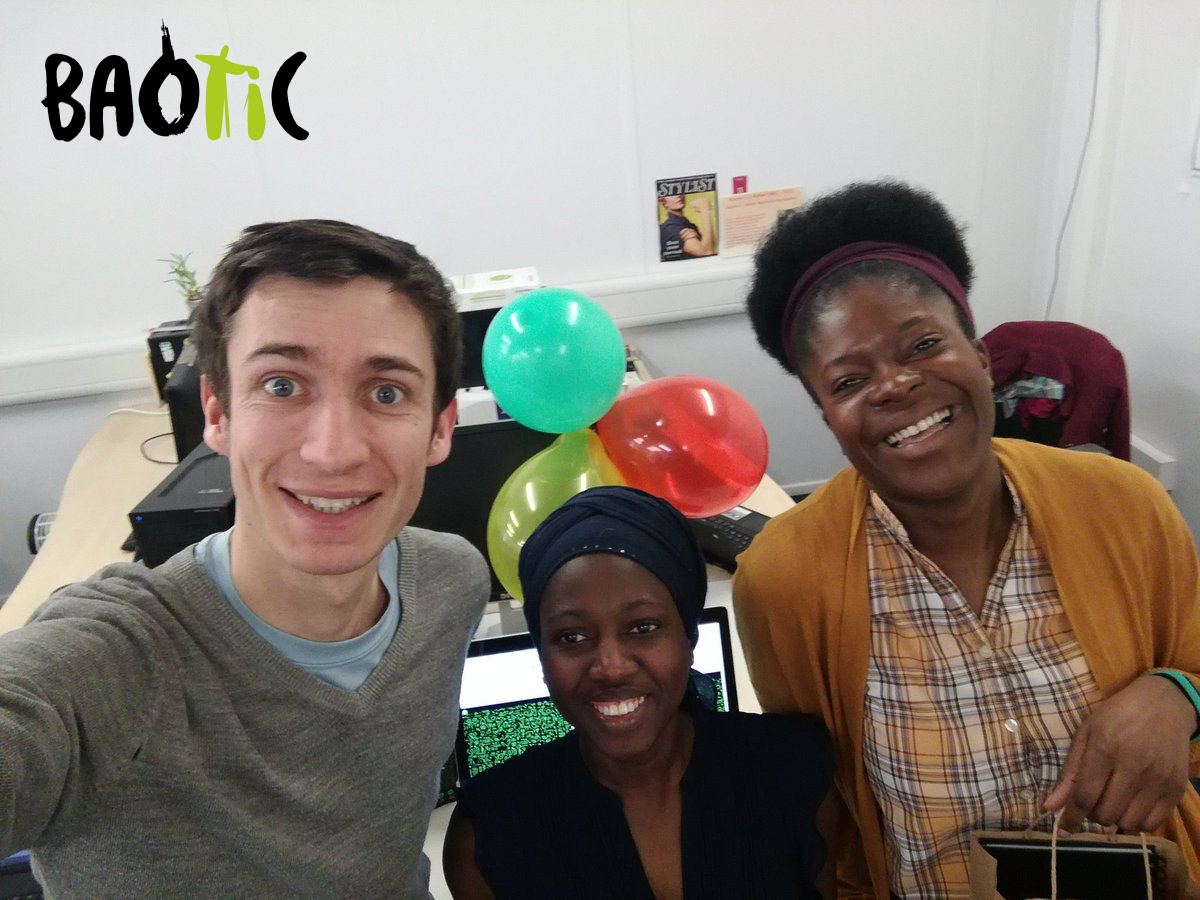 A bit part of the role was supporting with the planning and preparation for the Baotic launch event and pushing for support and pledges for the Crowdfunder.

As well as using my technology, content and marketing skills, I was able to learn how to manage and train new staff to quickly understand the need of the business, its brand, target customer and how best to work together as a team in such short time to deliver set targets.

I feel that the fast-paced startup experience with Drink Baotic has helped me to decide what type of company I want to set up once I have graduated.

What are you up to now?

Now I have accepted the offer to work as an Employability Coordinator for Radiant and Brighter in partnership with Working Rite. This job will involve working with the BAME community in Glasgow to access placements and training to support with securing permanent employment.

This role is part-time for nine months which means I will be able to continue with studies and I plan to start my own creative agency to support women and young girls in business.

What would you say to other employers about giving women opportunities to reignite their careers after a break?

Due to the stigma and difficulties that other women have faced, I knew that I needed to keep my skills up. I constantly kept track of the industry I was interested in joining once my daughter was in school. Once I was in was a company such as Drink Baotic, I gave it my all and extra to get the job done.

I believe that a lot of women out there are keeping themselves skilled-up and ready to return to the workforce.

Its a shame to isolate or neglect a group of workers, simply because they have had to take a break to have children, illness or other personal reasons

My message to employers is – make your job description accessible to all. Be specific about the type of training offered or actual skills that will be accepted. Make it easy for women to return to work, allow for job-share and flexibility.

Consider a positive scenario that having a break from a career allows many of us to come back with passion and clear motivation for the job. We develop a keenness to learn new skills to better support our team and organisation to thrive.

Dealing with setback, rejection and other people’s negative opinion, has given us many of us the type of strengths and resilience to deal with any difficult situations that may come across as part of a job.

Most importantly, giving women the opportunity to get back to work will also bring a great diversity and innovation that an organisation may not realize they were missing.

Any final thoughts on being part of the Back To Work project?

The opportunity provided by Adopt an Intern, Radiant and Brighter and the organisations opening their business to the scheme, has allowed for me to return to work while gaining a degree and raising my daughter.

Knowing that a company such as to AAI is around, I feel confident about my future after graduation as I know I will have the same opportunity to be seen by an employer as any other graduate. I also know that companies in the scheme will be looking at my qualification, experiences, skills and ability for the job rather than judging my life choices.

The Back To Work project must continue as it has helped me get to a place I have been battling to get to while studying everything under the sun. The opportunity will give other women like me the same confidence to have both family life and working career.