In this issue of VQ Magazine from Vistage, the focus was the elements of talent management – from attracting and recruiting employees, to the challenges of retaining them in the business by way of the training and development that can contribute to this. 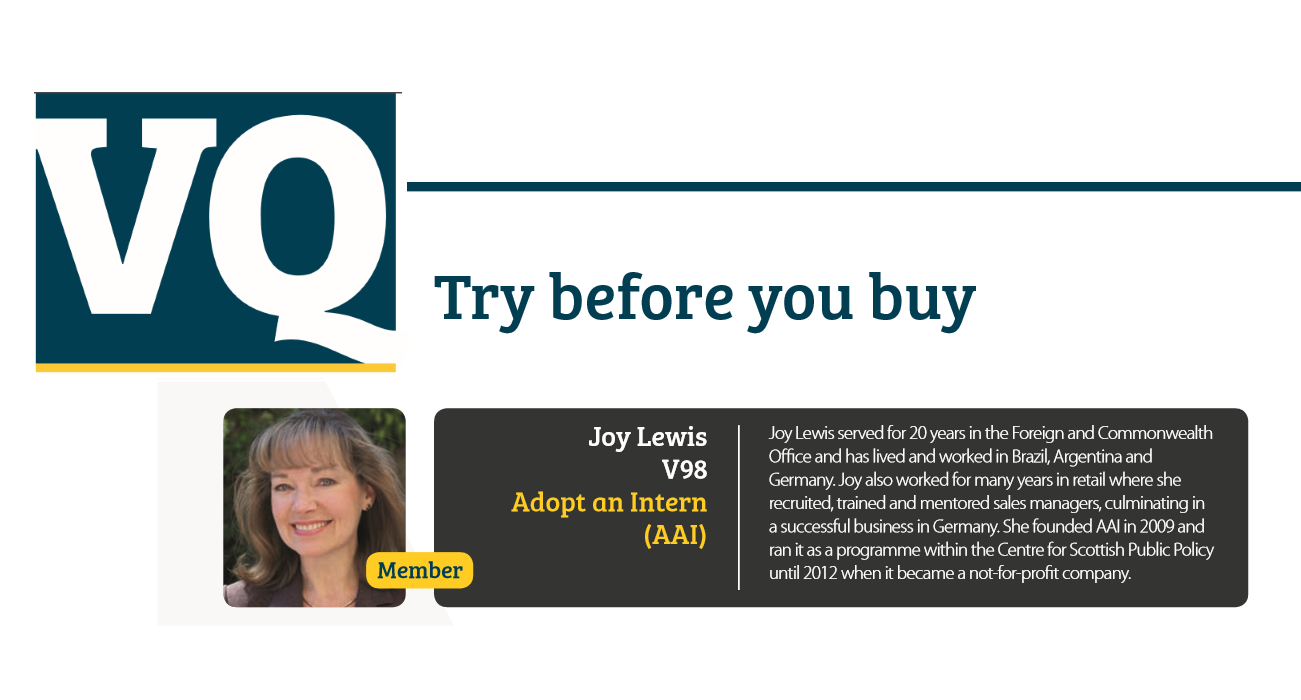 Joy Lewis, CEO of Adopt an Intern (AAI) prefers not to use the word ‘recruitment’ with clients as their idea of recruitment tends to diﬀer from her own which focuses on ﬁt – graduates with the right attitude for the company and the role. Getting a good match basically. AAI works with both new graduates and postgraduates (of all ages) and those returning to the workforce after a break, who may not have used their qualiﬁcations in a permanent role. Applicants apply via open competition for paid internships which, in 65% of cases turn into permanent contracts of employment, despite no previous commitment from the employer.

Theirs is a ‘try-before-you-buy’ philosophy; why not take on an intern for say three months and then, if it works out, employ them permanently? If it’s not right, the company and the graduate can easily part company without the aggravation entailed in terminating a permanent contract. “We minimise the risk,” says Joy. 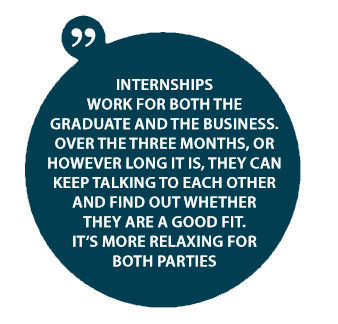 This practical, hands-on approach to testing the compatibility of employer and employee is somewhat at odds with the prevailing philosophy of the HR world. Many corporate HR departments rely heavily on techniques like psychometric testing but, having seen many appointments made on the basis of such approaches fail, Joy is sceptical.

When you have potential permanent hires working under your own roof for a meaningful amount of time (3-4 months is usually enough), you will have a much better idea of their long-term suitability for the role. Rather than psychometric tests, her experience has conﬁrmed to her that by taking graduates on under a temporary arrangement, by speaking to them regularly, watching them while at work, and asking others how they are getting on, “any decision to hire on a permanent basis will be based on a solid, practical reality”.

This to some extent challenges the prevailing view of the HR function. Joy comments that most HR departments are set up to support an in-house function, dealing with important employee issues, so it saddens her when she hears people speaking of HR as a blockage rather than a facilitator and it’s almost always to do with procedures slowing down recruitment and the line manager feeling distanced from the process.  She believes that outsourced recruitment can and should be quick, personal, ethical and produce outcomes that HR can easily monitor.

As for the AAI model, the advantage of the internship route is that there is less risk to the business and less administrative eﬀort involved than taking on permanent staﬀ with a probationary period built in. As Joy says; “Internships work for both the graduate and the business. Over the three months, or however long it is, they can keep talking to each other and ﬁnd out whether they are a good ﬁt. It’s more relaxing for both parties.” If at the end of that period both sides are happy, the default would be to switch to a permanent contract. As Joy says; “They’ve proved themselves with no risks.“

Who do you attract?

The focus here is on graduates and returners. The latter might have taken a break after university to bring up children or care for an elderly relative, some may have never actually used their degree. Joys sums this up simply; “If they want to contribute to the economy, why wouldn’t we help them to achieve their goal?”

Joy feels that there are still some problems around getting graduates into meaningful work where they can use the skills they’ve learnt. She says that seven years ago when she started AAI, graduates left their courses with very little help to move into the job market but now many universities are speaking directly to businesses. She believes, however, that “more could be done to improve that bridge between graduate and employer” and that’s what AAI continue to do.

One issue she struggles with is the large elbows universities have developed over the years.  Gone are the days when you posted one advert and it went across all universities.  Now recruiters and employers have to post adverts individually with each university.

It seems crazy that universities wouldn’t want all graduates to have a chance at a good job and “may the best grad win”. She feels that universities have made the employment process fairly onerous for employers, recruiters and graduates and the former are therefore forced to look just at local universities for ease.

Sadly, the right person might be somewhere else entirely. As she says; “They need the right person for the job not just the nearest person. You should be advertising across the whole country for the person who really wants to work for you. That way they will catch a much more diverse range of people.” At the end of the day, many graduates are mobile so it is crazy not to cast the net wider.

Naturally, graduates come in many shapes and sizes and some businesses see those fresh out of higher education as a risk 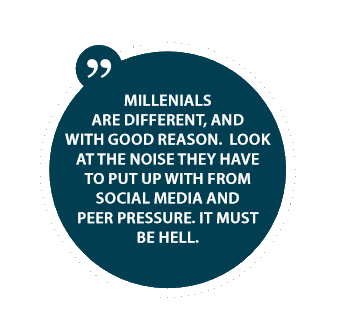 because of their inexperience. Joy points out that many graduates have worked throughout their study and have plenty of life and business experience. Other companies though might be looking for bright individuals who are capable of being moulded from fresh and there is no shortage there.

The rise of the Millennial.

But one thing that graduates do have in common is that they are almost all Millennials. While that category can be an excuse for lazy stereotyping, Joy believes that they are diﬀerent, and with good reason. As she says; “Look at the noise they have to put up with from social media and peer pressure. It must be hell. I get it when they question authority or insist their way is best; they’ve checked it all out on the internet!

For them wisdom and experience counts for nothing when the internet has the answers. The IT generation is used to instant gratiﬁcation, so of course they want to make an impact NOW.”

We know that business is about so much more than facts.  It’s about personalities and relationships, about those grey areas and those sensitive areas.  We know it takes time to get a feel for it.

What can we do about it?

“Support them through their new environment.  Corporates are being advised to educate and adapt and we can all do that. Understand their ways, be patient, appreciate the many good things and educate them about business and relationship building, and don’t be afraid to tackle them over issues you, from experience, know a lot about. Oh, and ban phones in all meetings!”